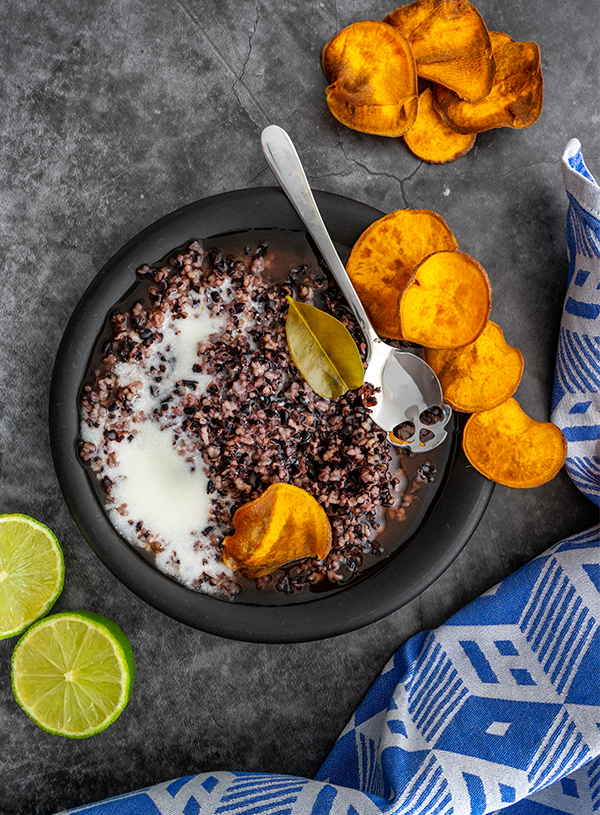 This recipe for bubur ketan hitam, Indonesian black rice pudding, comes from the award winning Dutch cookbook Indorock by rockstar food stylist Vanja van der Leeden. She created an amazing book, re-introducing the Netherlands to Indonesian food. To explain why that was necessary, I’m afraid a little history lesson is in order. Or just scroll down for the recipe.

The Netherlands was a huge colonial power during what locally is still referred to as The Golden Age. One of ‘our’ territories was Indonesia, a vast archipelago of different people and cultures that were pulled together through colonial rule by the Portuguese, British and Dutch, mostly to gain dominance over the global spice trade. This dominance lasted for around 300 years.

Once the war ended Indonesia claimed independence and the Dutch were booted out. With that a lot of people of European-Indonesian descent were kicked out as well.

The Dutch had managed the colony in part by giving certain Indo-Europeans a special status, above native Indonesians. They used us (yes I am one of them) as a sort of mid level management. With all the perks of whatever being mid management entails. But also with the clear distinction that we were never going to be white, with all that that entails.

As a result of our position and attempts of some Indo-Europeans to become the new senior level managers in Indonesia after Dutch rule, Indonesians were weary off those of us who had collaborated with the Dutch and kicked us out.

Indo-Europeans were initially born out of sex slavery and later through covert forms of sex slavery, where a housekeeper would also have to ‘keep’ her employer in other ways.

Depending on the politics of the day, children born from these arrangements (interracial marriages did occur, but were illegal or otherwise punished at various times in colonial history) would be allotted this special status (or not) and even be taken away from their Indonesian mothers once a European man finally found a wife ‘proper’ (i.e. a white one). You can get a glimpse of these practices by reading about the life of my grandfather.

Because laws and practices about Indo-Europeans changed over time, our family histories are all very different. We are often spoken of as a coherent group, but we’re really not. A lot of (unacknowledged) Indo-Europeans stayed behind, some by force, some by choice. There are even some Indo-Europeans that were never accepted by the Netherlands nor by Indonesia and are still living as stateless people in Indonesia, surviving on donations.

Sooo, what does this have to do with food?

Often, because of the status these refugees had in the colonies, they didn’t know how to cook. Most of them had a kokkie (a cook) in Indonesia. So once they got here and wanted a taste of home, they had to make stuff up. On top of that a lot of the ingredients used in the Dutch East Indies weren’t available here, so they had to improvise even further.

I got lucky because my grandmother started cooking at a very young age. She survived the war by selling small snacks on the streets. Her parents were afraid to go outside because her father was considered a collaborator for the Dutch. But was considered too Indonesian to be interned by the Japanese (not that that would have been any better, see my grandfather’s story linked above).

After Indonesian independence, my grandparents fled to New Guinea. There my grandmother ran a catering company. Until finally, after 5 years of pleading and begging (we weren’t considered European enough to repatriate), they were allowed to flee to Holland in 1962 where both my grandparents worked in factories while my grandmother sold snacks on the side.

So: my grandmother a) knew the original recipes and b) knew how to replace ingredients she couldn’t find. Though I imagine there’s a lot of stuff she didn’t even try because ingredients weren’t available. I remember we didn’t get pandan cake until the mid 90s and it was just a ready mix for chiffon cake. 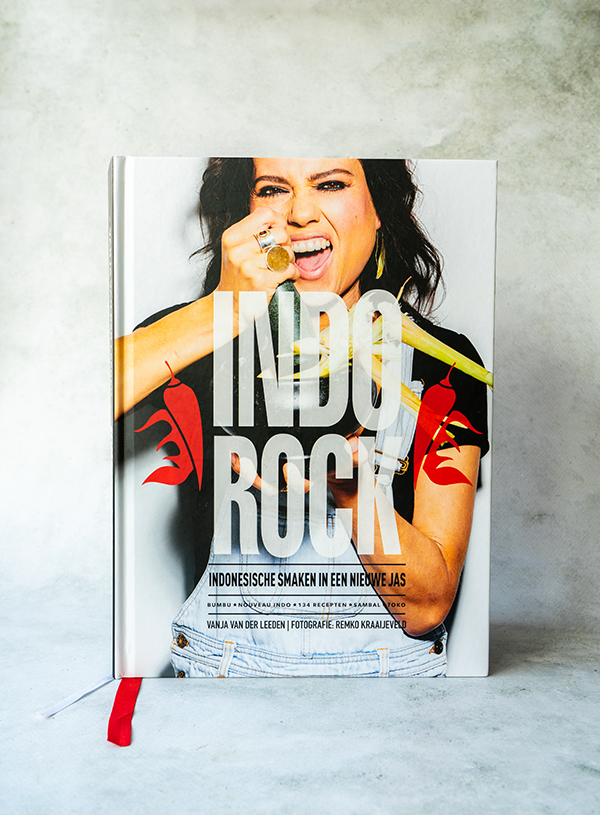 To bring it back to Vanja’s amazing Indorock. The Dutch interpretation of Indonesian food had been at a standstill for decades. Fed by nostalgia for our former home, or our grandparents’ homes (as in my case), what we were eating was a maybe 30’s to 40’s Dutch colonial interpretation of Indonesian food. With the kind of tweaks a diaspora makes when ingredients are missing.

Vanja traveled through Indonesia as it is now and brings its current flavors to us. Adding in some of her own ideas and preferences. In Indorock she highlights the many chefs, restaurants and people she met during her travels. She finishes off with small but crucial touches like explaining the difference between ‘Indisch’ and Indonesian. And using current Indonesian spelling for foods, rather than Dutch colonial spelling that is more commonly used here.

Bubur ketan hitam is just one of over a 130 exciting and inspiring recipes, that are all super fresh and light compared to the stodgy cooking of 40’s colonial Indonesia. At the moment Indorock is only available in Dutch and German, but hopefully it gets picked up internationally soon as well.

Want to know more about Indonesia?

As you may have noticed I’m not just into food but also very interested in Dutch Indonesian (post)colonial history. I think being a child of refugees. Growing up in what is essentially lost (colonial) culture for the first 20 years of my life have really informed the rest of my well… life.

It always surprises me how little people speak and know about Indonesia globally because it is the 4th most populous country in the world. It’s also one of the largest countries in the world.*

There are many more interesting books, so if you want even more I suggest you get to Googling.

* For the record: I have yet to visit Indonesia. As a teenager I hated the question if I’d ever been ‘back’. And later I hated the idea of going ‘back’ to a place that really doesn’t exist anymore. Indonesia is not the country my grandparents left behind and I do not feel a special connection to Indonesia as such. I am well aware I’d be a tourist. Now I would love to visit, but finding the time and funds (and now  corona) means I’ll probably be a while.

Now, for that recipe… 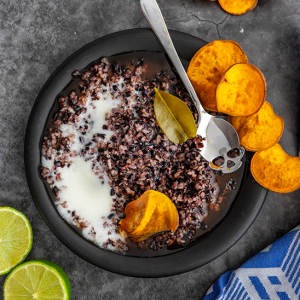 For the pandan coconut milk

For the sweet potato chips

The night before (or 8 hrs ahead of time)

To make the rice porridge

I don't like reheated porridge, but maybe you do. I'm sure the sauce and porridge will keep for a day. I recommend frying up a whole sweet potato because odds are you'll eat half of the sweet potato chips before you're ready to serve.
Keyword black pudding, breakfast, Indonesian food, Indonesian recipe, indorock, porridge, vanja van der leeden